Note: In July 2019, the 2018 results were added and 2017 simulation were rerun with updated meteorological driver dataset.

This data set provides gridded, model-derived gross primary productivity (GPP), ecosystem respiration (RECO), and net ecosystem exchange (NEE) of CO2 biogenic fluxes and their uncertainties at monthly and 3-hourly time scales over 2003-2018 on a 463-m resolution grid for the conterminous United States (CONUS) and also on a 5-km resolution grid for North America (NA). The 5-km results are further upscaled to a half-degree resolution. The biogeochemical model is Carnegie Ames Stanford Approach (CASA).

There are 708 files in NetCDF v4 format with this data set. This includes 420 files containing ensemble members of each carbon flux and 288 files that are the mean and standard deviation across ensemble members. 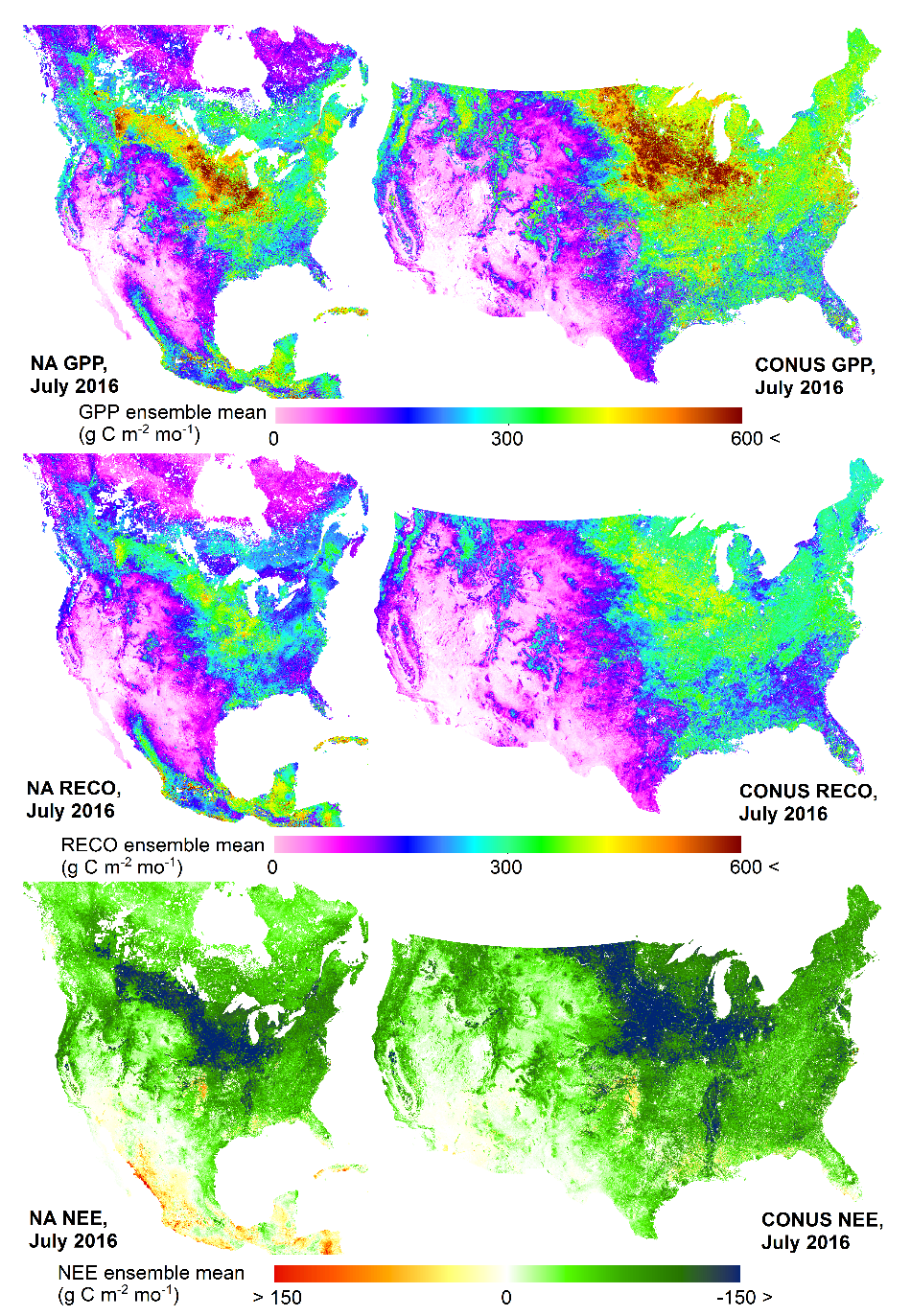 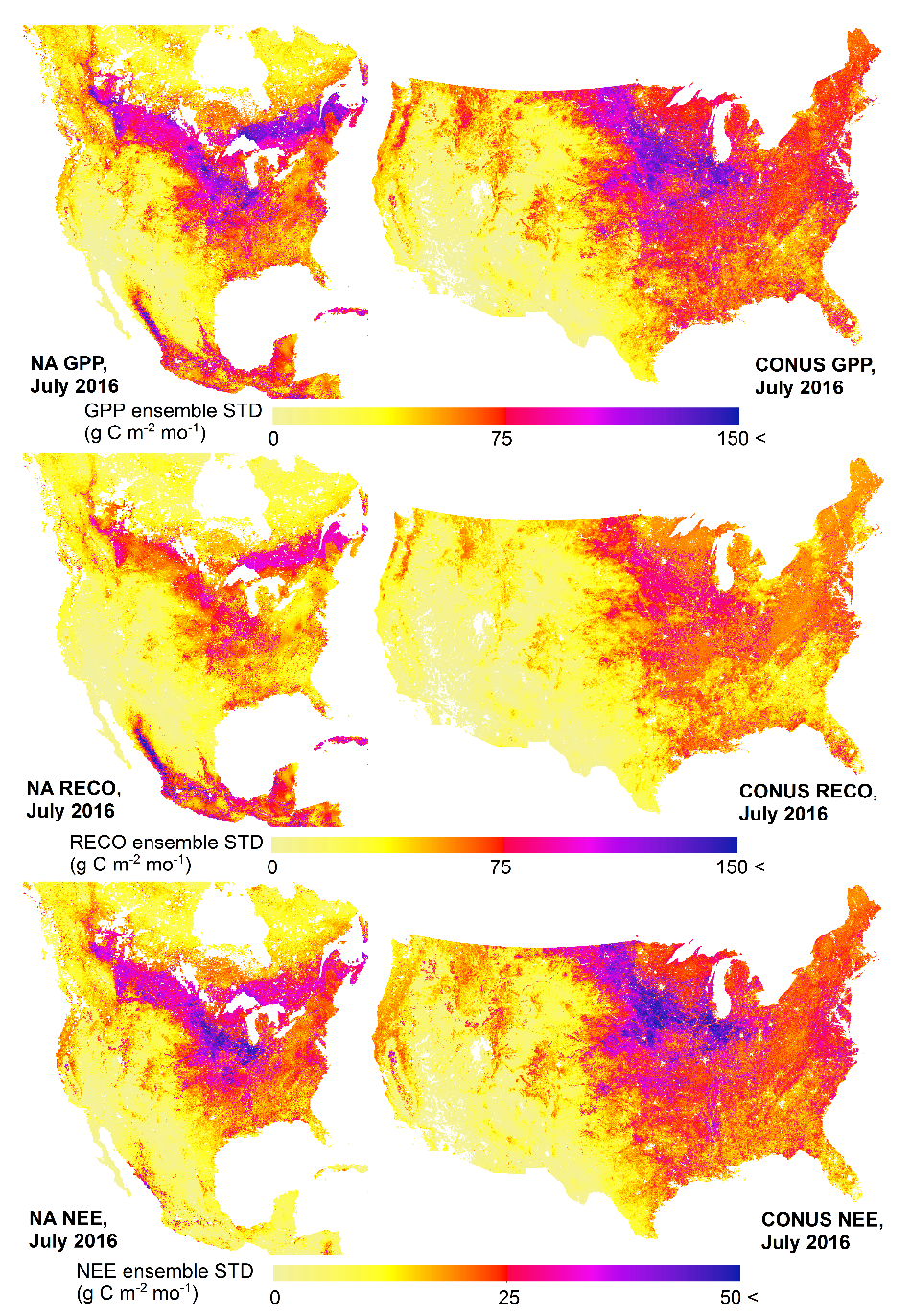 Figure 1. Mean and standard deviation of CASA L2 ensembles for three carbon fluxes (GPP, RECO, and NEE) and at 463-m resolution for the conterminous US (CONUS) and at 5-km resolution for North America (NA) in July of 2016.

The ACT-America, or Atmospheric Carbon and Transport - America, project is a NASA Earth Venture Suborbital-2 mission to study the transport and fluxes of atmospheric carbon dioxide and methane across three regions in the eastern United States. Each flight campaign will measure how weather systems transport these greenhouse gases. Ground-based measurements of greenhouse gases were also-collected. Better estimates of greenhouse gas sources and sinks are needed for climate management and for prediction of future climate.

Temporal Resolution: Monthly and 3-hourly (3-hourly data is available for North America domain in 2016-2018; other temporal and spatial spans can be generated at user’s end with provided R script)

Site boundaries: (All latitudes and longitudes are given in decimal degrees)

There are 708 files in netCDF v4 format in this data set, including 420 files (204 monthly and 216 3-hourly files) containing ensemble members of each carbon flux and 288 files are the mean and standard deviation across ensemble members. CONUS (conterminous United States) files are at 463m×463m spatial resolution, NA (North America) files are at 5-km×5-km resolution, and NA_HalfDeg (upscaled North America) files are at half-degree resolution. The time dimension is defined as the middle time point of each time period (e.g., 15th day of Marches for monthly files; 1.5 hours of the first three-hour for 3-hourly files). Fill value and missing values are -9999 for all files.

CASALEVEL is the level of data product, we currently provide Level-2 (L2) and Level-2B (L2B).

TIMESCALE is either monthly or 3-hourly.

STATISTIC is the mean or standard deviation (STD) across ensemble members.

CARBONFLUX is GPP, RECO or NEE.

YEAR is the year of simulation.

MONTH is simulated month, which only used for 3-hourly data

These files are examples of ancillary data from 3-hourly NARR data set (https://rda.ucar.edu/datasets/ds608.0/index.html#!description) to use the R script for temporal downscaling.

YEAR is the year for temporal downscaling.

MONTH is selected month, which only used for 3-hourly data

Our product has finer spatial resolutions and a relatively long time span comparing to other available product. It could be used to access surface biogenic carbon fluxes across multiple spatial (hundred meters to continental) and temporal (hourly to annual) scales can give an indication of carbon cycle processes under different weather patterns and feedbacks to climate change.

Our ensemble product provides not only carbon flux estimates but also the uncertainty range. This data product also could serve as prior surface biogenic carbon fluxes for atmospheric inversion studies. 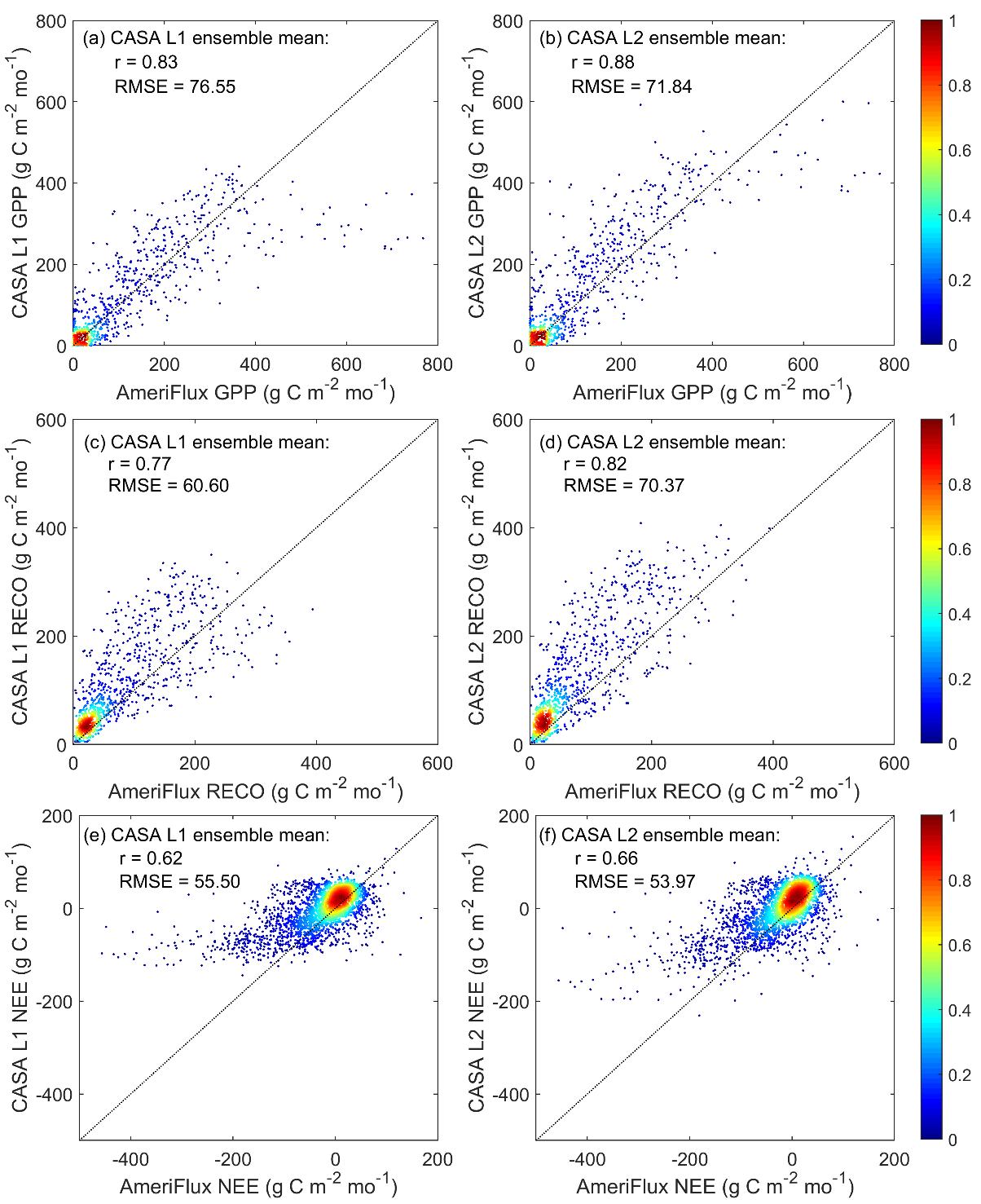 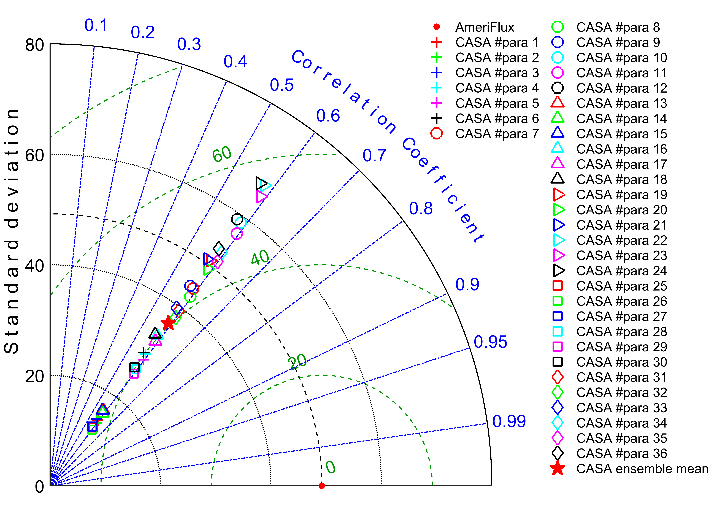 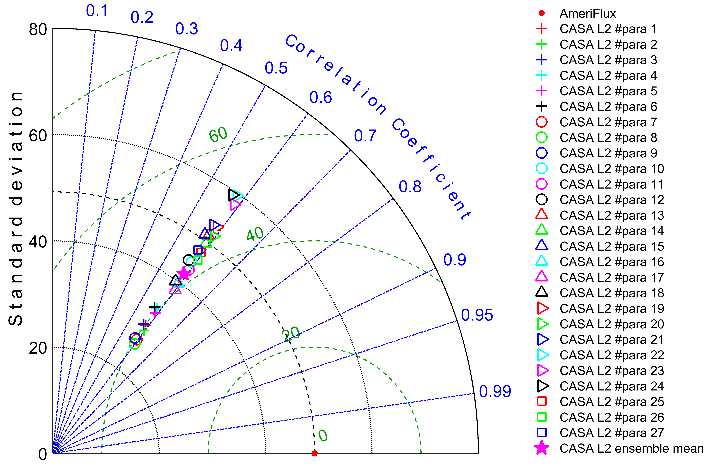 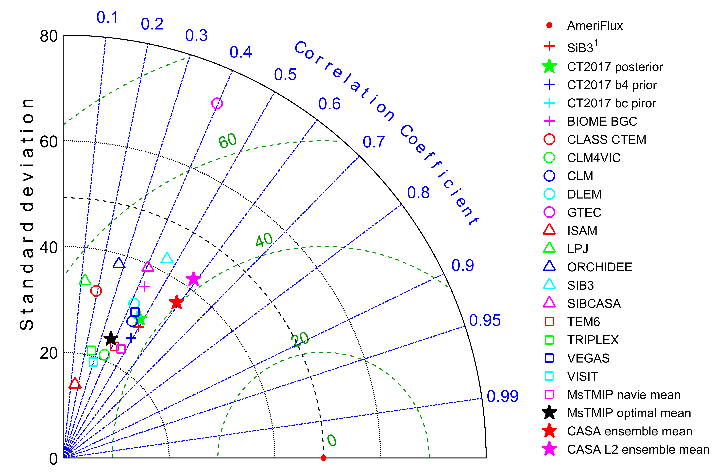 The modeling approach is based on the CASA biogeochemical model (Potter et al. 1993; Randerson et al. 1996). In CASA, NPP is calculated with a light use efficiency model driven by the absorbed fraction of photosynthetically active radiation (fPAR) and scaled by maximum light use efficiency (Emax), temperature scalar (TNPP) and moisture stresses (WNPP) at spatial location (x, y) and time (t) (Eq. 1). WNPP is derived based on a ratio of estimated evapotranspiration to potential evapotranspiration, varying from 0.5 in arid ecosystem to 1 in very wet ecosystem. TNPP is defined as T1×T2low×T2high. T1 reflects the empirical observation that plants in very cold habitats typically have low maximum growth rate (Eq. 2). T2 reflects the concept that the efficiency of light utilization should be depressed when plants are growing at temperatures displaces from their optimum (Eq. 3 and 4). T2 has an asymmetric bell shape that falls off more quickly at high than at low temperatures. Topt is defined as the air temperature in the month when the NDVI or LAI reaches its maximum for the year.

On a monthly time step, NPP is allocated to leaves, roots and wood (Eq. 5), with a default allocation ratio of 1:1:1. Each of these pools has a turnover time that specifies the rate at which carbon moves to litter pools (surface fine litter, soil fine litter, coarse woody debris). Carbon in the litterfall pool is either transferred to the microbial and soil organic matter pools or decomposed during the process (Fig. 1). Decomposition of dead pool (e.g. litter and soil organic pools) releases carbon, i.e. heterotrophic respiration (Rh), as Eq. 6:

where Q10 is the multiplicative increase in soil biological activity for a 10 ºC rise in soil temperature and T(x, t) is monthly averaged air temperature.

NEP is computed as:

We assumed a carbon use efficiency of 0.5 such that gross primary productivity (GPP) is 2×NPP. Correspondingly, total ecosystem respiration (RECO) would become the sum of NPP and Rh, and net ecosystem exchange (NEE) is equal to RECO – GPP. The data used as input to the model are listed in section 4.

where  is a temperature scalar, defined as following equation:

In order to further constrain Emax for each biome type, we use carbon flux measurements during the growing seasons from AmeriFlux and FLUXNET datasets (listed sites and corresponding years in Table S2) to infer the appropriate biome-specific range of Emax according to the light use efficiency model in CASA (Eq. 13). As flux sites are broadly distributed across space, we defined the growing season as months when the NPP is higher than averaged NPP within each year.

NPPobs_in is the inferred NPP value from flux measurement, fPAR is derived from MOD15A2H at each flux site, and PARobs is the ground-measured at each site (for sites lacking PAR observation, we used NLDAS-2 instead). NPP scalars (TNPP and WNPP) are computed using ground-measured precipitation and air temperature (for sites lacking these observations, we used data sampled from PRISM at corresponding flux tower locations).

In addition to the Level-2 ensemble product, we added Level-2B to the data set which is the random sampling of Level-2 ensemble (27 members) based on the ecoregion maps. The Level-2B file, entitled with “CASA_L2B_Ensemble**”, has 10 members that randomly sampled L2 ensemble member (i.e., parameter set) for each Level-3 ecoregion for both North America and CONUS. Considering the data volume, we included only GPP and NEE for the Level-2B data. More information about ecoregion maps can be found at https://www.epa.gov/eco-research/ecoregions. Levels 1-3 ecoregion maps are available for North America; levels 1-4 ecoregion maps are available for conterminous US. The supplement contains an R script and converted ecoregion files (netcdf files) in order for users to generate the random sample for the ecoregion maps at other levels or change the number of samples.

1) users need to prepare the time series of 3-hourly NARR air temperature (in degree Celsius) and downward shortwave radiation for each month, separately, and change the path (NARRPath) in the script. We provide the 3-hoourly NARR examples for 2016-2018 with the R script;

2) users need to set the working dictionary to the path saved monthly ensemble (MonthlyEnsemblePath), and put the reference maps (NA_grid.tif and CONUS_grid.tif) into the working folder;

3) users can select the year (save3hrYear), month (save3hrMonth) and parameter set (save3hrParaSet, default is all 27 parameter sets) for temporal downscaling;

Questions on how to prepare the 3-hourly NARR data or using this script can be forwarded to YuZhou2@clarku.edu (or CWilliams@clarku.edu)

We provide a R script of random ecoregional sampling to generate the Level-2 ensemble at users’ end for two spatial domains, conterminous United States and North America. The R script uses three packages, including ncdf4, rgdal, and raster. On the users’ end,

1) users need to determine which ecoregional level to work with by define "EcoregionLevel". Levels 1-3 are available for North America; levels 1-4 are available for conterminous US. Here we have converted shapefiles of different levels from United States Environmental Protection Agency (https://www.epa.gov/eco-research/ecoregions) to the netcdf files that can be directly used in this script;

3) users need to set the path of ecoregion files (e.g., if users are working with level-3 ecoregions for conterminous United States, the ecoregion file is CONUS_Eco_Level3_CASAgrid.nc4);

4) users can define the number of Level-2B sampling by change "L2BMembers";

6) users can select the year(s) ("SampleYear") for sampling;

7) users can select the carbon flux(es) ("CFluxes") to be sampled;

Questions on using this script can be forwarded to YuZhou2@clarku.edu (or cwilliams@clarku.edu)

These data are available through the ACT-America Model Data Repository hosted at the Oak Ridge National Laboratory.

For the L1 product, we perturbed the most sensitive parameters with the full 36 member suite of parameters (Table 3). This level of the product is not available online, please contact CWilliams@clarku.edu if you would like to use our L1 product.

This work was primarily funded by the Atmospheric Carbon and Transport (ACT) - America project, a NASA Earth Venture Suborbital 2 project supported by NASA’s Earth Science Division. Funding for this work came from the NASA ACT-America Project under award #NNX16AN17G and NNX15AG76G. This work used eddy covariance data acquired and shared by the FLUXNET community, including AmeriFlux and Fluxnet-Canada. Funding for AmeriFlux data resources was provided by the U.S. Department of Energy’s Office of Science. CarbonTracker (CT2017) results provided by NOAA ESRL, Boulder, Colorado, USA from the website at http://carbontracker.noaa.gov. Funding for the Multi-scale synthesis and Terrestrial Model Intercomparison Project (MsTMIP; https://nacp.ornl.gov/MsTMIP.shtml) activity was provided through NASA ROSES Grant #NNX10AG01A. Data management support for preparing, documenting, and distributing model driver and output data was performed by the Modeling and Synthesis Thematic Data Center at Oak Ridge National Laboratory (ORNL; http://nacp.ornl.gov), with funding through NASA ROSES Grant #NNH10AN68