Sustained airborne and tower-based measurements will be focused over three regional CO2 and CH4 source/sink regions in the U.S. The study areas are identified with a box that has the dimensions of the proposed flight patterns.

ACT-America, or Atmospheric Carbon and Transport – America, will conduct five airborne campaigns across three regions in the eastern United States to study the transport of atmospheric carbon.

ACT-America will advance society’s ability to predict and manage future climate change by enabling policy-relevant quantification of the carbon cycle. Sources and sinks of atmospheric carbon dioxide (CO2) and methane (CH4) are poorly known at regional to continental scales. ACT-America will enable and demonstrate a new generation of atmospheric inversion systems for quantifying CO2 and CH4 sources and sinks. 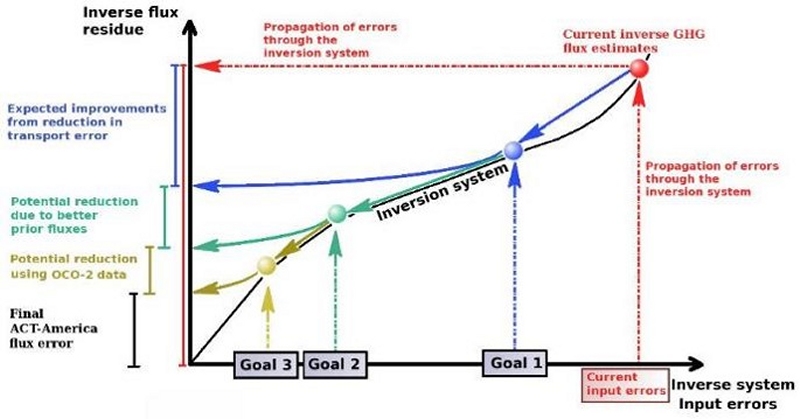 ACT-America will achieve these goals by deploying airborne and ground-based platforms to obtain data that will be combined with data from existing measurement networks and integrated with an ensemble of atmospheric inversion systems. Aircraft instrumented with remote and in situ sensors will observe how mid-latitude weather systems interact with CO2 and CH4 sources and sinks to create atmospheric CO2/CH4 distributions. A model ensemble consisting of a mesoscale atmospheric transport model with multiple physics and resolutions options nested within global inversion models and surface CO2/CH4 flux ensembles will be used to predict atmospheric CO2 and CH4 distributions.

Beyond the conclusion of the mission, application of the knowledge gained from this mission will improve diagnoses of the carbon cycle across the globe for decades.


ACT-America will deploy high-quality, field-tested (TRL-8 (Technology Readiness Level) or higher) trace gas and meteorological instruments. The mix of remote and in situ sensors enables extensive spatial coverage of key variables. The C-130 instruments includes the Multi-Functional Fiber Laser Lidar for CO2 columns, range to ground and surface reflectance; the Cloud Physics Lidar for ABL (Atmospheric boundary layer) depths and atmospheric aerosols; Picarro cavity ring-down spectrometers for in situ CO2, CH4, water vapor, and carbon monoxide (CO); 2B Technologies for in situ ozone; Flasks for CO2, CH4, CO, carbonyl sulfide, and 14CO2; and an environmental suite for in situ pressure, temperature and winds. The UC-12 has the same in situ sensors save for winds. Towers utilize Picarros for in situ CO2 and CH4. 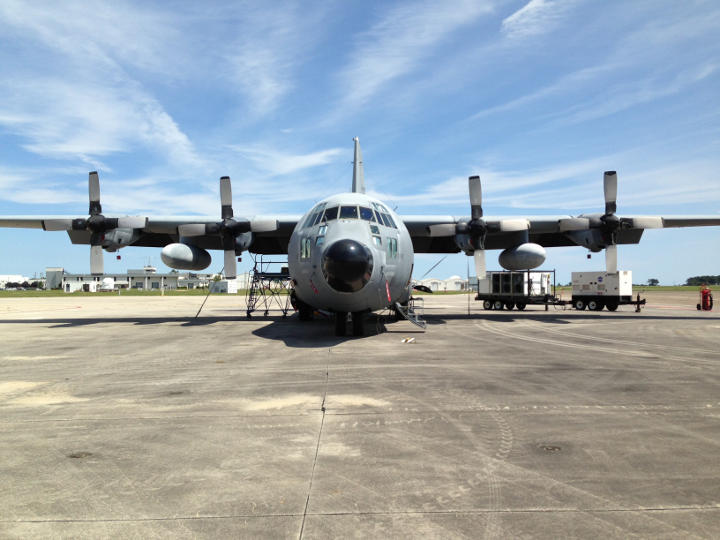 NASA’s C-130 on the tarmac at Wallops Flight Facility in Wallops Island, Va.
The C-130 payload includes two remote sensing instruments: the Multi-Functional Fiber Laser Lidar (MFLL), a Laser Absorption Spectrometer (LAS) for measuring CO2 column number density weighted to the near surface atmosphere as well as range to the surface and surface reflectance, and the Cloud Physics Lidar (CPL), an aerosol backscatter lidar for measuring ABL depth and aerosol distributions. The C-130 also carries a comprehensive suite of in situ sensors measuring CO2, CH4, carbon monoxide (CO), ozone (O3), and H2O (water), and flasks that measure CO2 and CH4 as well as GHG tracers, particularly CO, COS, and 14CO2.

The B-200 has an identical suite of in situ sensors and flask sampling capability. In situ sensor redundancy for CO2, CH4 and CO on each aircraft provides the opportunity to evaluate in flight performance of the measurements. 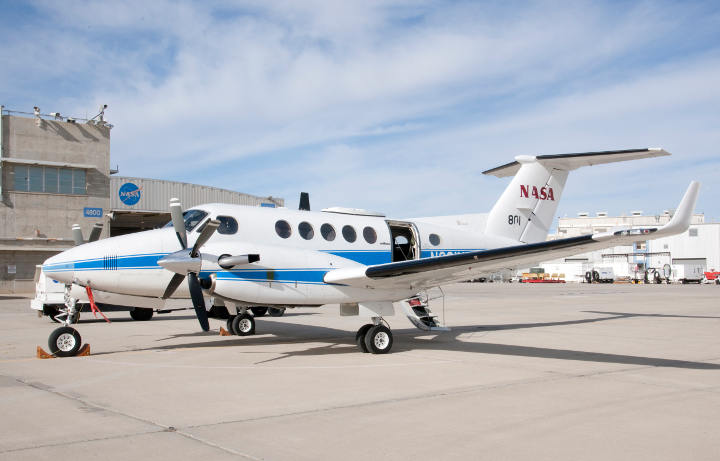 NASA's B-200 on the ramp at the Armstrong Flight Research Center.
Both aircraft are also equipped to provide high accuracy and precision meteorological measurements. All instruments meet or exceed the precision and accuracy levels required by the STM over the requisite averaging scale. Most instruments exceed the STM requirements at their native resolutions, which are higher than those required by the STM. Remote Sensing Instruments

MFLL: The MFLL is a suite of Continuous-Wave (CW) lidar instruments consisting of: 1) an intensity modulated multi-frequency single-beam synchronous-detection Laser Absorption Spectrometer (LAS) operating at 1571 nm for measuring the column amount of CO2 number density and range between the aircraft and the surface or to cloud tops, and surface reflectance; and 2) a Pseudo-random Noise (PN) altimeter at 1596 nm for measuring the path length from the aircraft to the scattering surface and/or cloud tops. 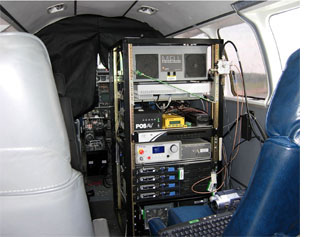 MFLL instrument rack onboard a Beechcraft B90 aircraft

The LAS instrument, developed by Exelis, Inc. (now part of Harris Corp.) in 2004, has been extensively evaluated in 1000+ hours of ground testing and in 13 multi-day flight campaigns conducted over a variety of meteorological conditions and surface types during both days and nights. The LAS CO2 column measurements have a precision equivalent to relative CO2 mole fraction precisions of about 0.30 ppm over land and 0.72 ppm over water. Absolute comparisons of CO2 remote and in situ measurements showed an absolute accuracy of 0.65 ppm of CO2 (Dobler, et al., 2013, Browell et al., 2012), meeting the 1 ppm CO2 accuracy requirement. Based on this extensive flight testing, the LAS instrument meets the CO2 column measurement requirements of the mission and is considered to be at TRL-8.

CPL: CPL is an airborne lidar system designed specifically for studying clouds and aerosols, and has participated in nearly 30 science measurement campaigns. It also has been used extensively for satellite validation. The Cloud Physics Lidar provides a complete battery of cloud physics information, greatly surpassing the measurement requirements for ACT-America, especially for ABL height measurements. Data products include: 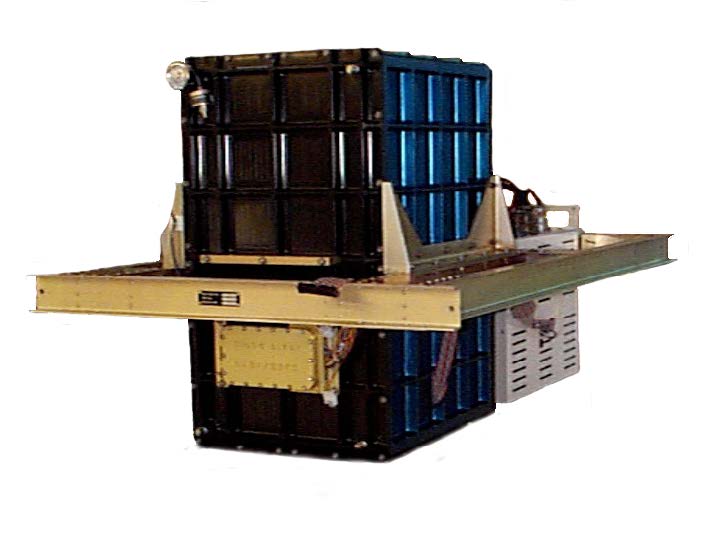 The CPL uses photon-counting detectors with a high repetition rate laser to maintain a large signal dynamic range. This dramatically reduces the time required to produce reliable and complete data sets. The goal of the CPL analysis is to provide data within 24 hours of a flight including the cloud and aerosol quick-look pictures, cloud boundaries, ABL height, and depolarization information. The final data release shall be within 4 months for the mission.

Picarro continuous CO2/CH4/H2O/CO:The C-130 and B-200 both have Picarro instruments. Picarro analyzers are based on Wavelength-Scanned Cavity Ring Down Spectroscopy (WS-CRDS), a time-based measurement utilizing a near-infrared laser to measure a spectral signature of molecular absorption. Gas flows through a 35-cc optical cavity with an effective path length of up to 20 km and pressure of 140 Torr. Extremely stable and high-precision measurements are achieved through cavity temperature, pressure, and laser frequency control to better than 0.002 °C, 0.00003 atm and 1 MHz, respectively. Aircraft instruments are similar to surface-based sensors, but use faster flow rates, solid-state data storage, and additional vibration isolation.

2B Technologies Continuous O3: The Model 205 O3 monitor uses two ultraviolet beams in two cells to simultaneously measure O3-scrubbed air and unscrubbed air. This model has been approved by the Environmental Protection Agency as a Federal Equivalent Method (FEM) and is the fastest UV-based O3 monitor available.

Flask Measurement System: The NOAA Earth System Research Laboratory (ESRL) carbon cycle group has developed programmable flask packages (PFP) used in their aircraft network since 2003 and the tall tower measurement network since 2006. The PFPs hold twelve 0.7-L silicate glass flasks that can be triggered manually or automatically at specific altitudes, times or locations. Measurements of CO2, CH4, CO and other trace gases are made on one of two nearly identical automated analytical systems; the same systems are used in the ESRL ground, tall tower, and aircraft networks. COS (and hydrocarbons and halocarbons) will be measured via Gas Chromatography/Mass Spectrometry measurements. PFP flask sample responses are calibrated against whole air working reference gases, which, in turn, are calibrated with respect to gravimetric primary standards. At selected times, duplicate flasks will be collected and analyzed for 14CO2.

Environmental Parameters Suite: Water vapor, pressure, and ambient temperature are measured on both aircraft. Wind direction and speed will be measured on the C-130 only. Water vapor will be measured using a 3-stage chilled mirror hygrometer to make dew/frost point measurements with an accuracy of 0.2 °C. Ambient temperature will be derived using a Rosemount non-deiced model 102 total air temperature probe with a precision of 0.2 °C. Horizontal and vertical winds are calculated from high precision pressure transducers and aircraft position and attitude data generated by Honeywell inertial navigation positioning systems. Wind speed direction will be measured to within 5 degrees while horizontal winds will have an accuracy of ±1 m/s. Both measurements are made at 10-Hz intervals.

ACT-America will install five Picarro CO2/CH4/H2O instruments on existing communications towers, filling gaps that exist in or near our three study regions in the existing tower network. Specific sites will be selected in science-critical locations based on tall tower and local Ethernet or cell phone data connection availability. Data will be collected at 100 m above ground level (AGL) or higher. Daily, automated data transfer to the Langley Atmospheric Science Data Center will allow remote monitoring of instrument status and investigation planning. The tower-based investigators continuously operated five similar tower installations in the Midwest from 2007-2009 (Richardson et al., 2012b; Miles et al., 2012) and are currently operating 12 such installations around the city of Indianapolis (Miles et al., 2013). Additional measurements that will be used in this study include NOAA moorings along the East and Gulf coasts, the Total Carbon Column Observing Network (TCCON) sites at Park Falls, Wisconsin (WLEF) and the Department of Energy-Atmospheric Radiation Measurement (DOE-ARM) Central Facility, OK sites, and the NOAA Aircraft (biweekly vertical profiles) and Tall Tower networks.